The Gift of St Anthony of Egypt to African Christianity Today 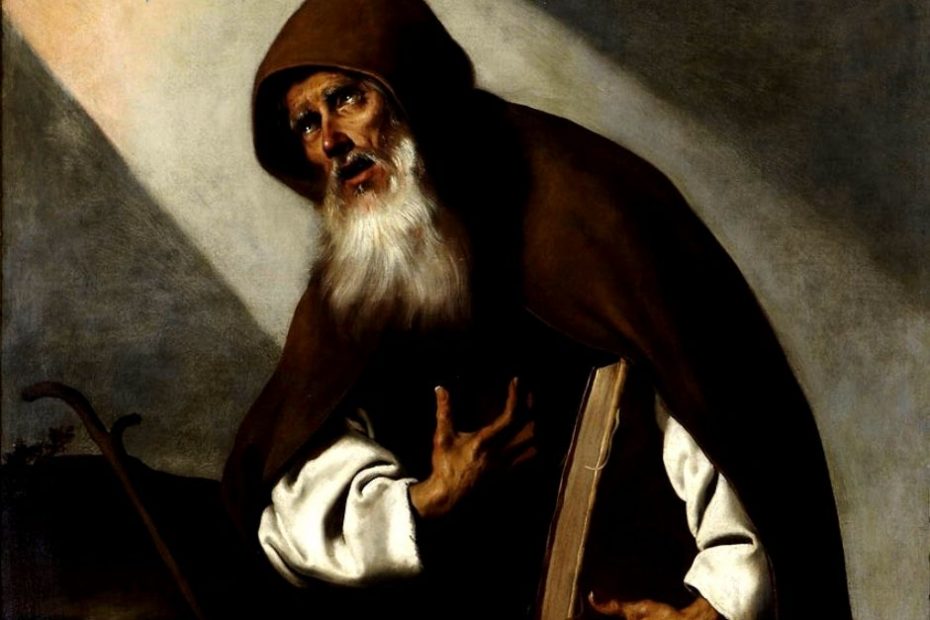 “Anthony, the man of God … from his youth to so great an age preserved a uniform zeal for the discipline, and neither through old age was subdued by the desire of costly food, nor through the infirmity of his body changed the fashion of his clothing, nor washed even his feet with water, and yet remained entirely free from harm. For his eyes were undimmed and quite sound and he saw clearly . . . And the fact that his fame has been blazoned everywhere; that all regard him with wonder, and that those who have never seen him long for him, is clear proof of his virtue and God’s love of his soul . . . That this was the gift of God no one will deny.” (Athanasius, The Life of St Anthony the Great, p. 221)

Back in the 3rd and 4th centuries of the Common Era, there lived a Christian leader in the deserts of Upper Egypt named St Anthony (c.251 – c.356). He stands out among the ancestors of African Christianity probably much more than anyone else. His memory was preserved by the great church father, Athanasius, giving us an evergreen insight into St Anthony’s inspirational life. Anthony pioneered monasticism—the idea of separating oneself from the sinfulness of one’s society to live a life of holy stillness—as it was known in the early centuries of Christianity. He retreated into the desert and blazed the trail for countless others to set their foot on the path to similar selflessness which gave rise to the first Christian monastic community in the ancient Egyptian desert. Seventeen centuries after his death, church history continues to acknowledge his historical significance. There are many lenses through which Anthony’s life can be viewed. However, in this reflection, I view his life and ministry as a symbol of African Christianity today. Such a consideration can bear many fruits, but I will highlight only two below.

First, his battles with demons. To reflect on the life and ministry of St Anthony, we must include his battles  with demons in the deserts. To do otherwise will be a gross travesty to his biography. Most notable amongst these battles with demons was one that earned him the divine promise of global renown and God’s perpetual presence. On this occasion, the devil visited St Anthony with a host of demons including “the ease of pleasure”, “the friend of whoredom” and “the spirit of lust.” They beat him so mercilessly that he laid helpless on the ground from the extreme torment. He was rescued to a nearby village by the friend who brought him food but as soon as he awoke, he requested to be returned to his tomb where the battle continued. Eventually, the roof of the tomb gave way to a beam of light and a promise from God: “I will ever be a succour to thee, and will make thy name known everywhere.”

To draw the relevance of Anthony’s battles with demons to African Christianity today, I believe that African Christians need to battle their many ‘demons,’ metaphorically or otherwise. While the African in me will love to contest the popular generalisation that African Christianity is a mile wide and an inch deep (well knowing that this can also be said of all continents), I could not help but wonder if the contradiction of the most Christian region of the world (Sub-Sharan Africa) also being the most corrupt (according to Transparency International) partly upholds the generalisation. In some parts of Africa, the imported prosperity gospel (which, in some ways, promises “the ease of pleasure”) has stood in the way of the pure gospel. The political systems of some churches make secular politics look holy. The lust for power has turned some megachurches in Africa into family businesses while a preoccupation with projects in some churches continues to dwarf their attempts at intentional discipleship. These factors jointly contribute to the seeming contradiction of African Christianity—the faith fails to transform the continent. There is hope, though. As Anthony’s mastery over demonic powers preceded his renown, African Christianity must likewise intentionally and aggressively combat its demons for an authentically African contribution to God’s mission to become a reality. African theology and Christianity must figure out how to engage the Scripture with thoroughly African (literary) tools. The African Study Bible and African Bible Commentary are laudable efforts that have begun such engagement. May there be more of such initiatives in the continent and its diaspora.

Second, Anthony’s ministry training model. In spite of the fact that Anthony himself did not build a monastery, his exemplary life attracted a community of disciples with whom he shared the wisdom he gleaned from his personal Christian experience. This was his model for ministry training. Athanasius’ biography only immortalized what was in itself an exemplary life. This model of ministry training is African at its core and is a noble challenge for ministerial training in contemporary African Christianity. It is unfortunate that the prevalent model of ministry training in seminaries across Africa is largely Western and results in an unnecessarily formal teacher-student dichotomy. We do not find such class distinction in Anthony’s mentorship example. Rather, he lived and ate with the monks as he taught them. “He used, however, when by himself, to eat … often also with the brethren … speaking boldly words of help” (p. 208). Again, of him, it was said “According to his custom he visited the monks in the outer mountain…” (p. 219). As Joshua learnt from Moses, or Elisha from Elijah, or the apostles from Jesus, and Timothy from Paul, Anthony trained these monks that were attracted to his ascetic life by doing life with them. Athanasius recalls one occasion when Anthony and his disciples needed to cross the Arsenoitic Canal to visit some other brethren; at the time, the canal was full of crocodiles, but as a leader, “by simply praying, he entered it, and all they with him, and passed over in safety … by frequent conversation he increased the eagerness of those already monks … and he directed them all as a father” (p. 200). Such demonstration of power cannot be taught theoretically. This is a biblical model for ministerial training that resonates with the African way of life. It is how African farmers raised farmers in their stead and how African mothers prepared their daughters for the next generation. It is how Anthony himself was mentored. “He subjected himself in sincerity to the good men whom he visited, and learned thoroughly where each surpassed him in zeal and discipline” (p. 196). Compartmentalizing training away from ministry (as though one needs to master the former before being qualified to do the latter) is more western than it is African, and African Christianity will need to recover Anthony’s ministry training model in training African pastors and leaders.

The enigmatic life of St Anthony remains a bundle of countercultural inspiration that will challenge any Christian—even 21st century Christians. His admonition on perseverance (17-20), the simplicity of his life (17, 47, 50, 93), his disposition to his spiritual gifts (22-37, 43), his thoughts on charity and hospitality (46, 50), his willingness to learn, his cautious dealings with the state, and many other aspects of his life are rich deposits of insights applicable to African Christianity but which I could not explore in this reflection. However, his resolve to fight and conquer the demons that besieged him and his ministry training model stand out in their application to African Christianity. Above all, Athanasius’ first words about St Anthony should be a melody to African ears: “Anthony you must know was by descent an Egyptian.” Whatever may be said about this notable icon in Christian history, it should never be forgotten that he was truly African. As Thomas Oden rightly said, “Only seated prejudices can blithely charge that these great leaders were not genuinely African” (How Africa Shaped the Christian Mind, p. 65).

previousChild Sexual Abuse: Reflections for the African Church
nextWhen A Goat is Present